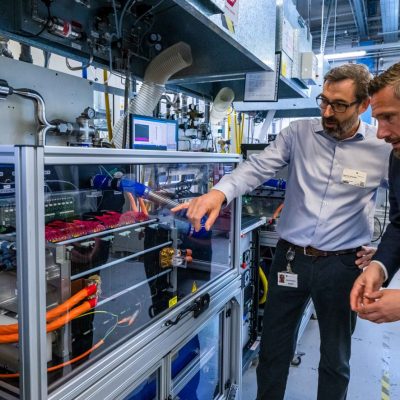 Loughborough – 24th May 2022 – Intelligent Energy, a leading UK hydrogen fuel cell manufacturing company based in Loughborough, hosted senior government representatives from the German state of Saxony earlier this week to showcase its world leading fuel cell technology and to discuss collaboration plans as the company looks to expand its footprint across Europe.

The Saxony state delegation was made up of Martin Dulig, the Deputy Prime Minister and State Minister for Economic Affairs, Labour and Transport, and Gerhard Liebscher, Member of the Saxon Parliament, as well as representatives from the business community in Saxony. They toured Intelligent Energy’s facilities at Holywell Park and saw first-hand how a hydrogen fuel cell is produced.

During the visit, Mr Dulig presented his government’s Hydrogen Strategy which was adopted earlier this year. He highlighted the importance of hydrogen to Saxony’s economy, adding that it makes Europe’s energy supply independent and carbon neutral.

“We were honoured to welcome Martin Dulig, Gerhard Liebscher and their colleagues to Loughborough. They have shown great interest in fuel cell technology and recognise the importance of the role companies like ours will play if we are to reach net zero emissions by 2050.

Saxony is becoming a significant player in the hydrogen space, and they see fuel cell technology as a way of making Saxony one of the pre-eminent centres of the nascent Hydrogen Economy. We are seriously considering taking our relationship to the next level and see whether we can work even more closely together as we look to scale up our manufacturing capabilities later this year.”

The technology is expected to form a key plank of the UK Government’s decarbonisation agenda. Hydrogen fuel cells are an off-the-shelf zero emission technology which combine the best of traditional fuel engines and battery: they have a long run-time range, you fill them up once a week, the fuel cell drives an electric motor, and the only emission is water.

Intelligent Energy (IE) is a world leading fuel cell engineering business with 30 years’ experience in the development of zero-emission fuel cells. It is focused on the development, manufacture and commercialisation of its lightweight, high efficiency fuel cell technologies which are based on its large portfolio of patents.

The product range includes the world’s highest power density fuel cell for unmanned aerial vehicles (UAV) and systems providing power from 1kW to 100kW for applications including automotive, aerospace, power generation, telecoms, marine, rail and materials handling. IE is headquartered in the UK, with additional operations in the US, Japan, South Korea and China.